The Pros and Cons of Studying Abroad in Netherlands

Home Beyon The Pros and Cons of Studying Abroad in Netherlands 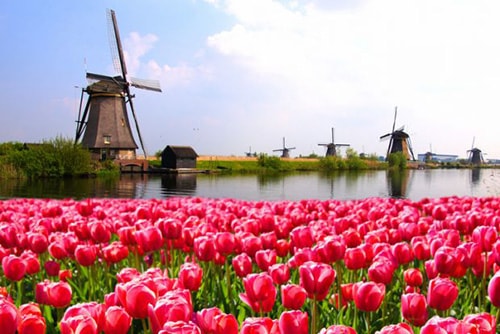 When you’re considering study abroad locations, you’ve probably thought about the Netherlands as a viable place to pursue your education; you may have noticed that it’s a popular spot for international studies, and that Netherlands has started to stand out in terms of higher education opportunities.--So, what are the plus-sides, and what are the downsides of studying in the Netherlands?

The 4 Pros of Studying in the Netherlands

1. The Dutch are bilingual wizards

You may be shocked to find that more than three quarters of the population in the Netherlands claim to be proficient in English. It’s true! This is also a great advantage if you are a foreigner and don’t speak any Dutch. The fact that English is everywhere will makes life outside of the university campus quite easy. Of course, learning a language is wonderful and you’re advised to at least learn a few basic Dutch words so you can fit in better.

However, you won’t have to struggle with the language barrier in the beginning and you can easily interact in English with people everywhere: at the university, supermarkets, and government buildings.

And, of course, the language of instruction, especially for Master and PhD programmes, is mostly English.

2. Your career will get the coveted Netherlands boost

Dutch universities are known to be among the best universities in the world, competing with other famous UK and U.S. universities. You could say Netherlands is one of the top non-English speaking countries where you can study abroad, get quality education and find loads of degrees taught in English.

It goes without saying that graduating from a university in the Netherlands will provide you with numerous advantages for your future career. You will not only be able to find a job in the Netherlands (especially in English-speaking companies), but your qualification will be recognised and valued all over the world.

So, take advantage of this opportunity, and see how it can serve you best in the future.

3. You have plenty of scholarships to choose from

Applying for a scholarship is the best way to make sure you can cover the high costs. Here are a few examples of scholarships for international students:

Some universities (mostly the technology and engineering related ones) work in collaboration with private companies, and these companies also award scholarships.

4. Get two Master degrees for the price of one!

According to a state regulation, if you pay the statutory tuition fees for your first enrolment (in a Bachelor’s or Master’s degree), if you decide to enrol to a second degree at the same time, you will be exempted from paying any tuition for your second programme. This applies if you enroll at the same university or a different one, as long as they are both public universities.

Additionally, within most Dutch universities, you can choose as many elective courses as you want and you don’t have to pay an additional fee.

A new policy also states that if you are from an EU/EEA country or Suriname and you start studying a Bachelor’s at a public university in the Netherlands in 2018-2019, you will only pay half of the tuition fee in the first year. The key condition to be eligible is to not have studied in Netherlands before.

The fee discount also applies to Master’s degrees in Initial Teacher Education, provided that you start a Bachelor’s in Education in 2018-2019.

The 3 Cons of Studying in the Netherlands

If you come from a country where the education system is more traditional, (i.e. the professors give you a schedule and tell you what and when to do, courses are more practical and project-based), you may feel lost here in the Netherlands, since the faculty have a different attitude towards students and education.

As a student, you have to take responsibility, be active during class and feel free to share your ideas and opinions.

You should definitely develop a strategic plan long before the project deadlines, do a thorough research and present your ideas clearly and concisely. In one word, you will become an independent learner.

2. The Dutch might be too weird for your style

If you come from a society where there is hierarchy and where you’re expected keep a certain distance between you and your professors, you may come across some cultural problems. There is a more casual relationship between students and the faculty in the Netherlands.

For example, where you come from, you may have never dreamt of saying “What’s up?” to a 60-year-old professor, right? But here in the Netherlands, they encourage this kind of casual relationship.

If you can’t adjust to this attitude, there is a possibility that you will be considered “shy” or someone who has “communication problems”.

3. Nice weather is practically non-existent in the Netherlands

Unfortunately, Netherlands is not a country where you can enjoy constant sunny weather. In fact, while the Netherlands has four seasons in theory, in fact summer season starts…well, never! So, when you catch a mere glimpse at the sun, enjoy it while you can. Every other day of the year, you’ll have just rainy and windy weather. Winters are, on the other hand, pretty mild, so you won’t enjoy a lot of snow either. Admittedly, that can be a pro or a con at the same time, depending on whether you’re much of a winter or a summer type of person.

Think it through and figure out if Netherlands would be the perfect spot for your higher education studies. Look into Bachelor and Master degrees offered by Dutch universities, and if you believe the cons of studying in the Netherlands are something you can easily handle or won’t bother you at all, then look no further and come study abroad in the wonderful Land of Windmills! Ready to go to the Netherlands?

Masters in Logistics management Rotterdam business school Beyon borderz provided me with correct and right information right from the start. On the point contact when I met them in the fair to precisely 30 days time they had filed my application with the university. From start to finish the team was in contact with me to ensure all went smooth. Wether its Visa assistance or course selection Beyon borderz offered me personal advice and they were always available on call and whats app to clear my queries quickly Thanks to the team for clearing my unending list of queries and making sure I get to RBS on time. I would recommend Beyon Borderz for their Personalized good service.

For an individual to advance in an endeavour, composure and self-assertiveness is obligatory. But favoured by the stars is he/she when bestowed with a solid anchor. I am indeed charmed to have learnt Keerthana as my guide, friend and mentor who unwaveringly stands and strives her fullest to position me tranquil and construct for me a series of nonchalant University Protocols. And my heart’s all teeming and scaturient with gratefulness for the Radboud University, Indian Representative for being the unsurpassed chaperone/host ever!!

I am exceptionally happy with the service I received from Beyon Borderz. Their representatives, especially Keerthana, guided me through every step of my path to Vrije Universiteit Amsterdam. The whole process (starting from applications to resident permits), was made simpler due to the constant inputs given by Keerthana. Now that I am set to join the class of 2019-20 at Vrije Universiteit, I can firmly state that the service provided by Beyon Borderz far exceeded my expectations! I would highly recommend Beyon Borderz to those interested in pursuing higher education in The Netherlands.